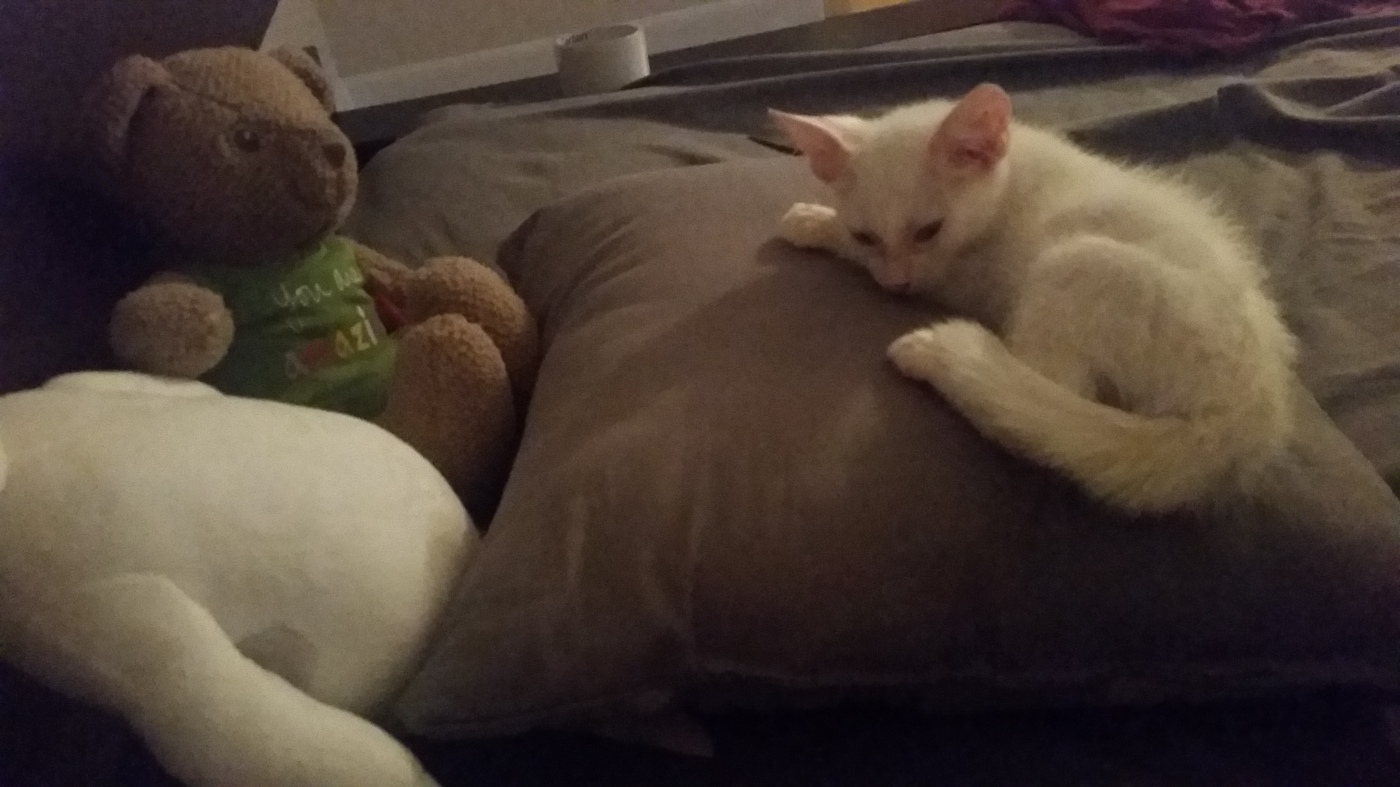 The story of Pages, library kitten.

On Thursday, July 2, right before the big weekend off of work, I walked outside the auditorium of the movie matinee (showing, of course, Despicable Me 2 in honor of the Minions premiere the following week, more on that later), two of my fellow colleagues were outside on the patio, hovering over a box.

Contrary to many popular stories, our particular library system is restricted from bringing in any animals unless they’re service animals.

But… yet… who can be the meanie to say no to this face?

White #kitty was found at @MDPLS#northdade… we’ve named her Pages. Can’t she be our new mascot!? 😦 pic.twitter.com/DJFiOTBA07

I peeked in the box, huffed and both E’s, J’s and S’s, unashamed sentimental natures on savingalltheanimalsonourdoorstep (4 incidents now that I can remember clearly), and went inside to talk to The Boss, who was then cornered by 4 women, and ultimately OK’ed the kitten to be taken inside and placed in one of the single stall men’s bathroom until we figured out what to do with it.

Alas, it was already past normal business hours; Animal Services was packed up for the day and the Humane Society was already closed. The library itself would not be open again until Monday.

I went inside the bathroom stall, peeked in the box again, at Pages mismatched blue and green eyes, as he shivered in the cold…. thought about how George was a stray, and how JP was a stray…

…And grumbled all the way as I carried him home at closing time.

After a bath with Dawn soap to get rid of the fleas, and some wet food, Pages was loving, and affectionate, and slept right next to me that first night.

I posted up on FB a call to action for anyone who may have wanted a snowy white kitty, but was left without any takers.

The next day, I woke up early and took him to the Humane Society, who promptly rejected him after seeing his scabby ears and declared that he may have scabies.

In the middle of some transition myself, I could not foresee affording possible extensive medical care that Pages may have needed–testing for that feline HIV, his scabies, his distended belly, and that possible eye infection, and goodness knows what else…

I was faced with taking him to the kill-shelter and hoping that his cuteness would indeed be enough to get him treated and adopted within the time frame they keep strays…. or bring him home and wait and see.

….And so… I carried him back home.

As only fitting, I made a little den for him in my home office, surrounded by books. For the most part, he’s been away from George and JP due to the possible scabies, but has been introduced to them — and is as loving and as affectionate as can be expected. 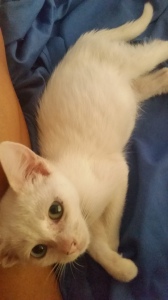 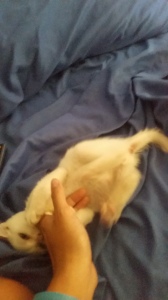 After a week of prodding, one of my colleagues eventually decided that yes, she would take Pages and give him a home and further care.

On Monday, I’ll be saying bye to my library kitty, who is going to a good, stable home.

Bye, Pages — thank you for giving me all the cutesies and love for the time that we spent together!

Practical advice for writers and illustrators.